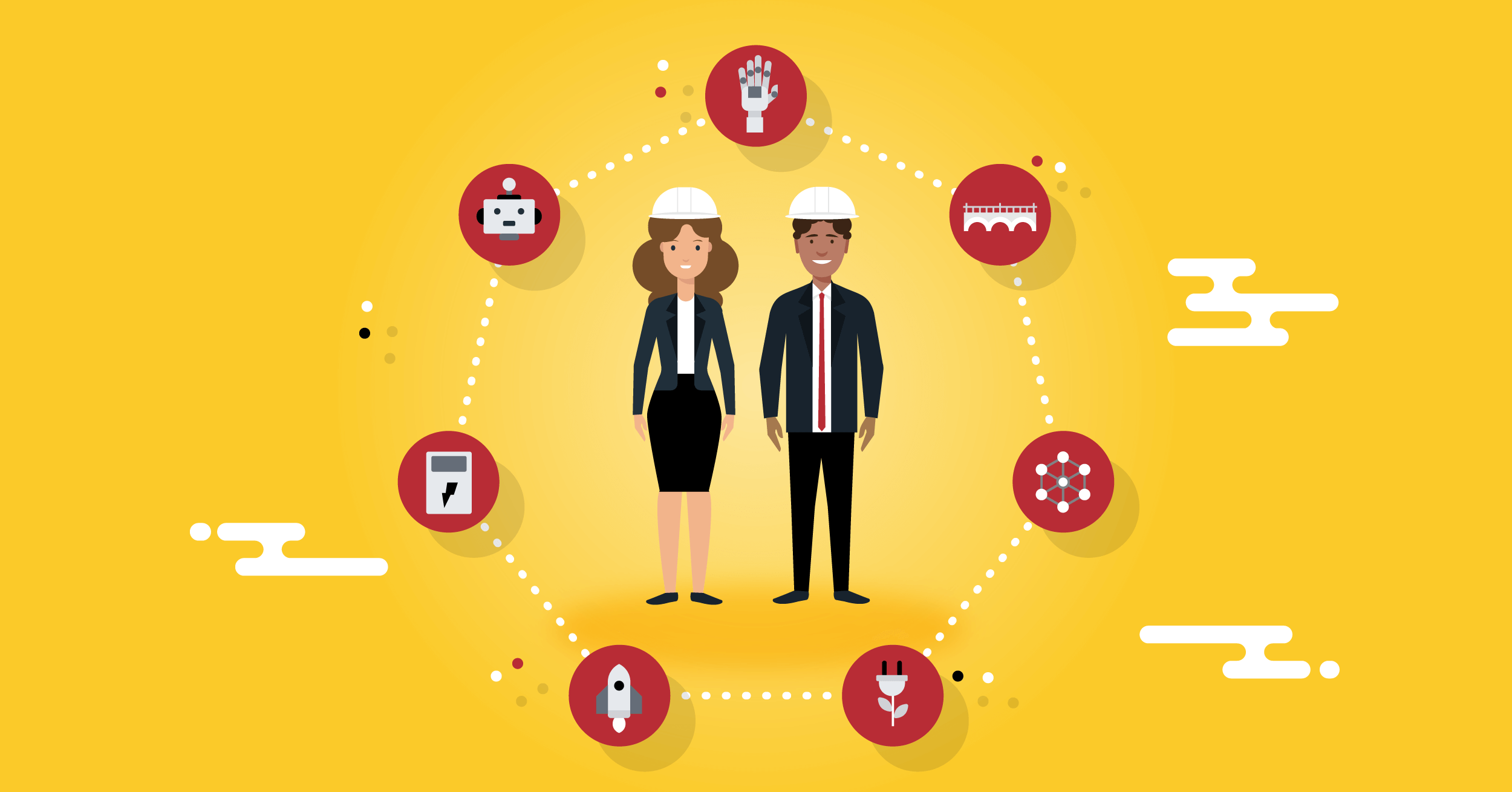 Throughout history, engineers have propelled society forward. The ability to harness electricity, improving the efficiency of agriculture and developing medicines and lifesaving equipment for the betterment of human health — the influence of engineers on society is incalculable.

Think about the grand structures of our time, the tallest buildings in the world, the largest dams, or the longest bridges. These engineering feats are visible to everyone. What about the innovations taking place at the microscopic and atomic levels? Vaccines and medicines allow us to live longer lives. Atom splitting allows us to unleash immense force. Further consider the innovations that have taken society from the Stone Age to the modern era. Think about the invention of the wheel; the development of the space program in the 1960s; or the hyperscale data centers that allow us to stay connected with others, get information, or entertain ourselves. All these achievements are the fruits of the labor of engineers working in various disciplines.

As new problems arise, engineers advance technology to help solve them. Still, as the world grows increasingly complex, 21st century engineering leaders must embrace an interdisciplinary approach to address challenges in technology, business, and society. The willingness to innovate across a complex global framework is essential to further technological advancement and build humanity’s long-term resilience in the face of familiar foes: climate change and disease.

A master’s degree and a professional engineering, or PE, license can help prepare engineers for an increasingly global society and to become leaders in their fields. A PE license is “the engineering profession’s highest standard of competence, a symbol of achievement and assurance of quality,” according to the National Society of Professional Engineers. The combination of an advanced degree and a PE license can position an engineer for increasing responsibility, including managing teams.

Engineers have become increasingly important, and organizations in industry, government, and academia seek to hire them. Science and engineering employment represents 5% of all U.S. jobs, exceeding the pace of overall workforce growth, according to “The State of U.S. Science and Engineering 2020” from the National Science Foundation. The median annual salary for occupations in science and engineering was $85,390 in 2017, according to the report: “more than double the median for all U.S. workers ($37,690).”

Employers often seek engineers with backgrounds in one of the four main branches of engineering: chemical, electrical, civil, and mechanical. However, engineering is a vast discipline centered on solving problems with innovative solutions, which makes it an evolving, expanding field. Popular engineering disciplines include biomedical engineering, aerospace engineering, and environmental engineering. 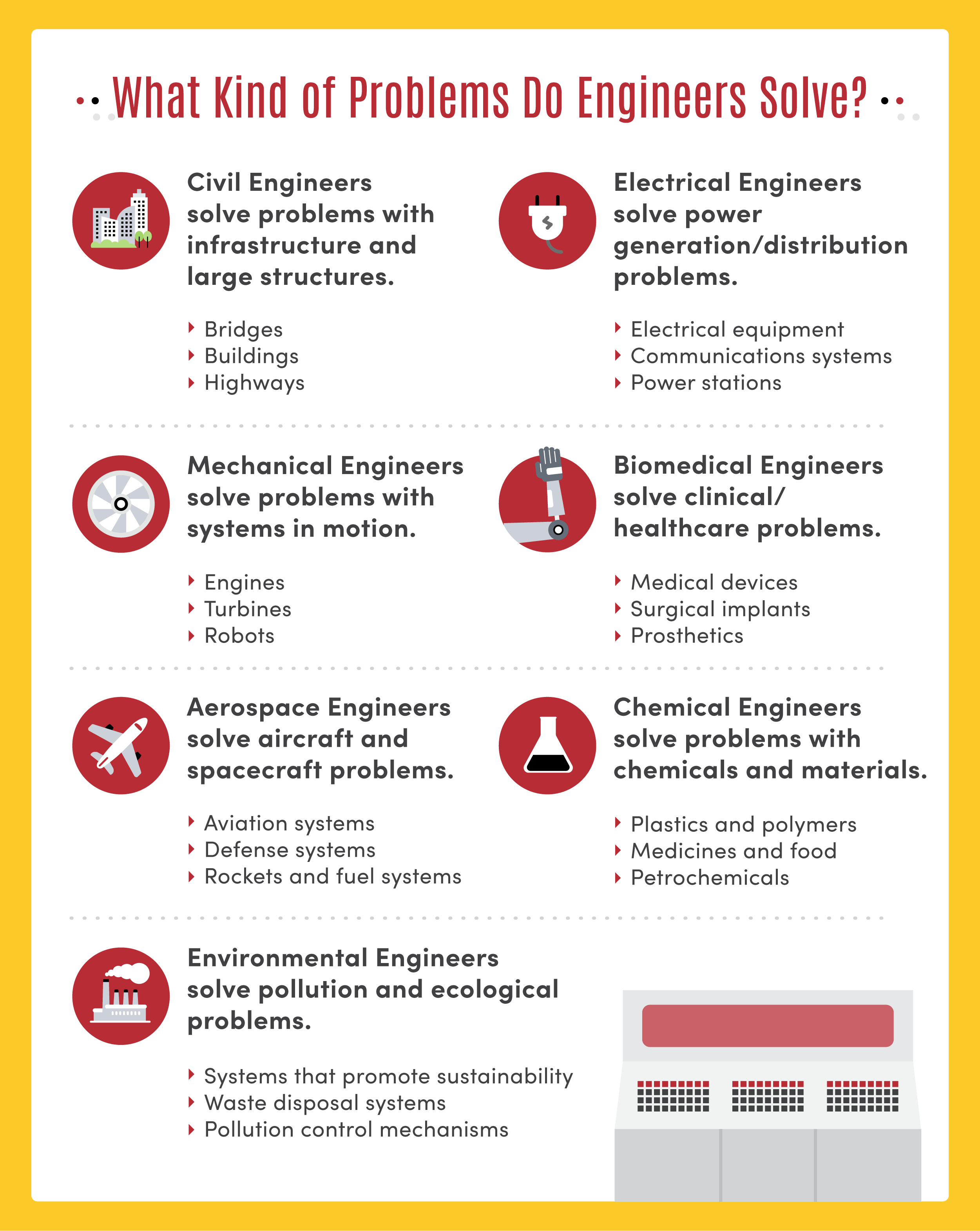 What Role Do Engineers Play at Biomedical Engineering Companies?

Biomedical engineers design and develop technology and instruments to treat diseases and help restore patient health. Part of their responsibility is to evaluate and repair health care equipment and devices. Biomedical technology includes:

Where Do Biomedical Engineers Work?

Top companies include Johnson & Johnson, GE Healthcare, and Medtronic. From medical devices and diagnostic imaging devices to pharmaceutical and consumer packaged goods, these companies provide wide-ranging career options for graduates who want to help save lives.

What Role Do Engineers Play at Civil Engineering Companies?

Civil engineers helped build some of the most impressive structures in history, from the Panama Canal and Brooklyn Bridge to the Three Gorges Dam in China and the Burj Khalifa in Dubai. These grand structures represent only a fraction of the work civil engineers do.

Civil engineers develop technologies, as well. For example, self-healing concrete helps protect a building’s steel reinforcement from water and oxygen corrosion. Other recent innovations include thermal bridging, which is an efficient insulation process, and photovoltaic glaze, which enables buildings to generate electricity.

Where Do Civil Engineers Work?

Civil engineers demonstrate leadership at construction sites, including coordinating site activities and promoting safe construction processes. They often work for state and city governments, which may require presenting their findings on public works concerning bids and the environmental impact of projects.

Top companies include AECOM, Jacobs Engineering Group, and Peter Kiewit Sons’. Ranked in the Fortune 500, these industrial engineering and construction firms are among the most innovative in the industry. 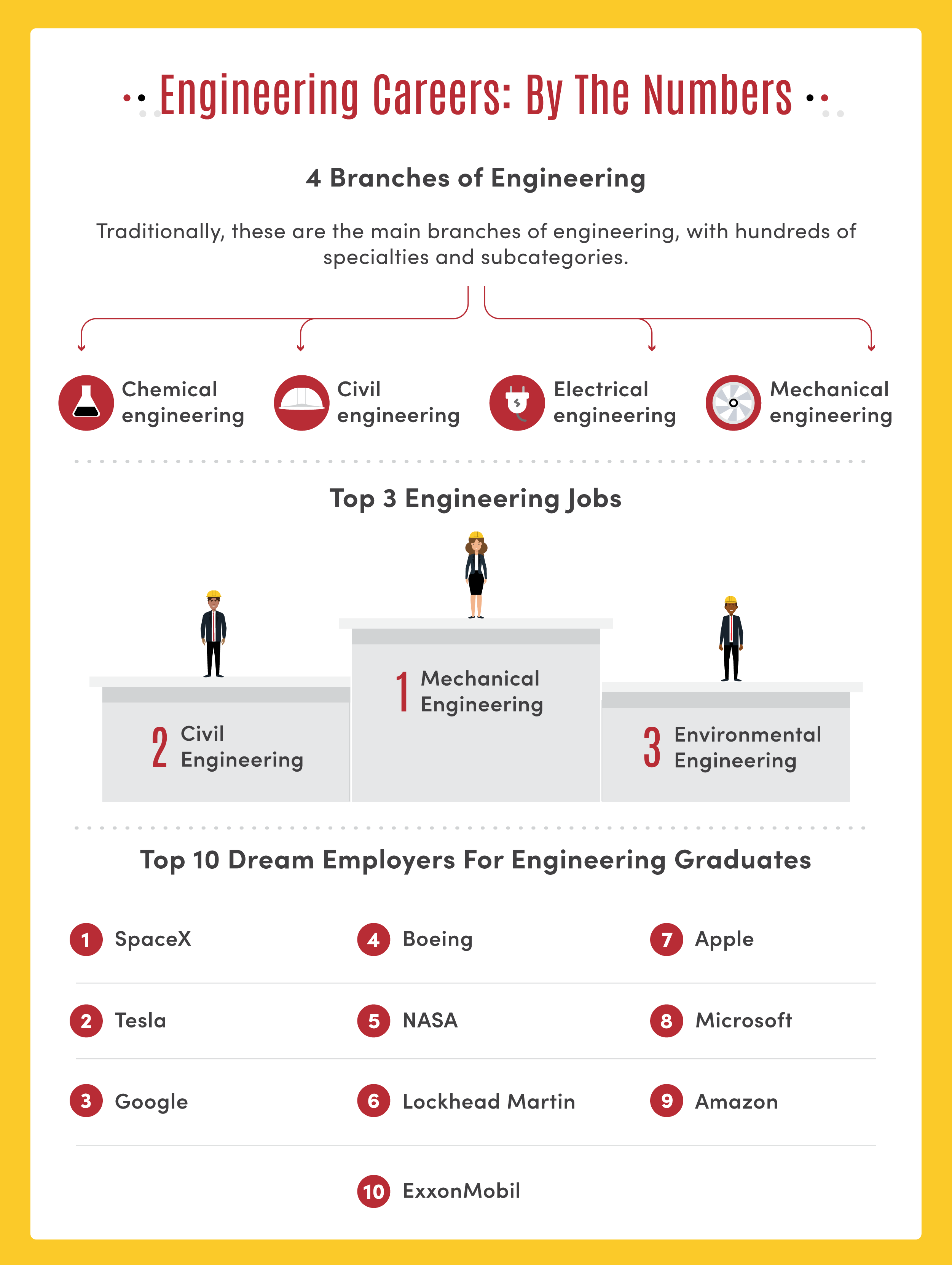 What Role Do Engineers Play at Mechanical Engineering Companies?

Mechanical engineers have played a central role throughout history in making human life more comfortable. From the invention of the wheel and the earliest sea vessels to the sophisticated machinery and vehicles of the modern era, the mechanical engineering discipline has been a crucial driver of change and innovation.

Mechanical engineers are responsible for designing, developing, testing, and improving systems and devices with moving parts. They create mechanical systems for various industries:

Mechanical engineers are detail oriented and creative and use computer-aided design, or CAD, and analysis tools to develop equipment and machinery. They often work on projects with other engineers, architects, and computer scientists, among others. For example, they may collaborate with electrical engineers on designing power-producing machines, such as generators and turbines.

Where Do Mechanical Engineers Work?

What Role Do Engineers Play at Electrical Engineering Companies?

Electrical engineers have helped bring about the modern age by inventing and building the infrastructure that delivers electricity to homes and businesses. Renowned electrical engineers throughout history include Thomas Edison, George Westinghouse, Nikola Tesla, Guglielmo Marconi, and Philo T. Farnsworth. Thanks to their vision, the electric lightbulb, alternating current, induction motor, radio, and television are part of everyday life.

As experts in specifications and electrical safety codes, such as the National Electrical Code (NFPA 70), which has been adopted in all 50 states, electrical engineers help protect lives from electrical dangers.

Critical competencies for electrical engineers include:

Courses in drafting may be useful to prepare drafts of blueprints for homes and commercial facilities. However, electrical engineers are increasingly relying on CAD systems to create circuit designs and simulation tools to model electrical infrastructure, like a power grid or a computer microprocessor. They often collaborate with project managers and others to ensure timely, on-budget, and satisfactory completion of projects.

Where Do Electrical Engineers Work?

Electrical engineers work in various industries, from utilities and technology companies to the federal government, where they may work on electrical systems in satellite, flight, and sonar systems.

Top companies include Lockheed Martin, Texas Instruments, and Intel. These companies represent a wide range of opportunities across multiple industries for electrical engineers.

What Role Do Engineers Play at Aerospace Engineering Companies?

Aerospace engineers in the 19th century helped lay the groundwork for today’s fast-moving, global society. Since Orville and Wilbur Wright, credited for creating the first powerful engine to achieve sustained flight of an aircraft, aerospace engineers have been central to getting pilots and astronauts to reach new heights.

Aerospace engineers are responsible for designing, prototyping, and testing all types of aircraft systems.  Large-scale projects include:

Critical competencies for aerospace engineers include physics, math, and critical thinking skills. Business and communication skills are essential in both commercial and government organizations to explain issues of cost, performance, and safety to decision-makers without aerospace engineering backgrounds.

Aerospace engineers use their problem-solving skills to create innovative designs that maximize fuel efficiency without compromising performance. They often are the go-to experts in areas such as:

Throughout the engineering process, aerospace engineers leverage their knowledge of physics, mathematical models, and engineering principles to ensure that systems function as they should before use.

Where Do Aeronautical Engineers Work?

Top companies include Boeing, Airbus, and United Technologies. These companies specialize in aircraft manufacturing, where graduates can apply their skills in designing aircraft, spacecraft, and rockets, but also work in project engineering or systems engineering roles.

What Role Do Engineers Play at Chemical Engineering Companies?

Chemical engineers discover solutions in laboratories and lay the foundation for their innovations to be reproduced on a mass scale. Significant contributions to society by chemical engineers include making it possible to have safe drinking water, fuel for cars and power generation, antibiotics, vaccines, and medications for health, and plastics for products.

Chemical engineers are responsible for taking raw materials and transforming them into products such as foods, medicines, cleaning products, and oil. They understand industrial and manufacturing processes and often work closely with plant and machine operators to ensure proper development of products.Typical activities for chemical engineers may include:

Critical competencies for chemical engineers include the following skills:

Chemical engineers use these skills when conducting research in laboratories and improving manufacturing processes. Process engineers are a type of chemical engineer with specialized skills to focus on chemical process areas, such as oxidation or polymerization.

Where Do Chemical Engineers Work?

Top companies include BASF, BP, and Exxon Mobil Corp.. These companies represent different industries, which speaks to the variety of roles available for chemical engineers to innovate and find solutions.

Chemical engineers typically hold a bachelor’s degree in chemical engineering. For research and development roles and instructor positions beyond high schools, a graduate degree is recommended. Chemical engineers earned a median annual wage of $104,910 as of 2018, according to the BLS.

What Role Do Engineers Play at Environmental Engineering Companies?

Environmental engineers focus on protecting people from the harmful effects of pollutants and contaminants in the air, water, and soil. This branch of engineering can trace its roots back to Joseph Bazalgette, who, in mid-19th century London, built the first large-scale sanitary sewer system. Cholera epidemics and a persistent stench across the city prompted the first-of-its-kind environmental engineering project.

Environmental engineers are critical to public health and play a central role in the fight against climate change. They’re responsible for addressing the challenges of:

Critical skills needed by environmental engineers include knowledge of engineering principles, as well as the following competencies:

They use biology and chemistry science and critical thinking and data analysis skills to perform quality control checks and develop reports. They understand the environmental law to lead environmental remediation projects and help organizations comply with regulations.

Where Do Environmental Engineers Work?

From large-scale farming industries to manufacturing facilities, environmental engineers work at various sites to help organizations improve the quality of air, water, and soil, according to government standards.

Top companies and organizations include AECOM, HDR, Bechtel, and the Army Corps of Engineers. These companies provide opportunities for graduates to help develop innovative new technologies, from renewable energy sources to soil science advancements, that can have a positive impact on the environment.

7 Unusual Careers That Begin with an Engineering Degree

CNBC, “The 10 Most Attractive Employers for Engineering Students”

Forbes, “What Do Aerospace Engineers Do on a Typical Day?”

Houston Chronicle, “What Kind of Work Environments Do Mechanical Engineers Deal With?”

Live Science, “What Is Biomedical Engineering?”

Live Science, “What Is Electrical Engineering?”

Live Science, “What Is Environmental Engineering?”

National Science Foundation, “The State of U.S. Science and Engineering 2020”

New Scientist, What Does a Chemical Engineer Do?