Aeronautical Engineer vs. Aerospace Engineer: Which Career Is Right for You? 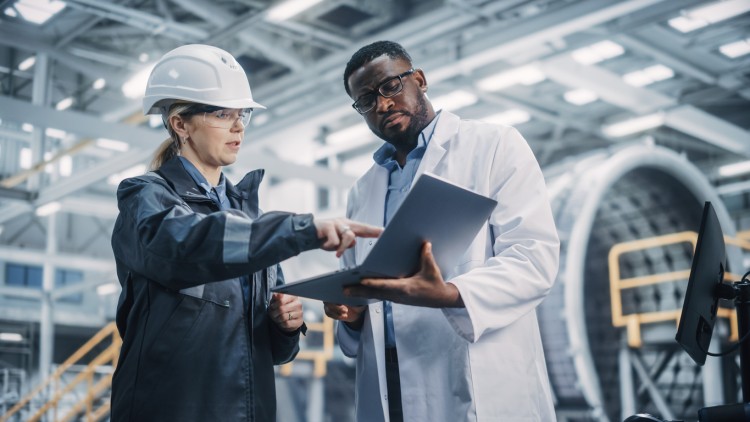 Other engineering branches ― such as aeronautical engineering and aerospace engineering ― have made it easier for people to travel anywhere. Airplanes are a building block of the global supply chain, making it possible to distribute goods from country to country faster than with traditional means, such as trains and ocean freighters.

A comparison of aeronautical engineering vs. aerospace engineering reveals that innovations in modern transportation, such as airplanes and space shuttles, impact economic activities and enable social well-being. Thanks to aeronautical engineers and aerospace engineers, significant improvements have been made in exploration, a key component in innovation. These engineers help minimize the risks associated with exploration, while arriving at discoveries that benefit society, from using drones to track weather events to helping develop the International Space Station.

These two branches of engineering are often paired. But comparing aeronautical engineers vs. aerospace engineers reveals key differences ― particularly the types of engineering projects they work on and the topics the different academic programs prioritize. This information is important for individuals deciding on which engineering career to pursue.

What Is an Aeronautical Engineer?

When Orville and Wilbur Wright achieved sustained flight of an aircraft with an engine in the 19th century, they likely did not foresee how their feat of engineering would transform the modern world ― and help create the exciting field of aeronautical engineering.

Aeronautical engineering focuses on designing, prototyping, manufacturing, and testing all types of machines capable of flight within the Earth’s atmosphere, from commercial airplanes and drones to military airships and helicopters.

Aeronautical engineers combine sciences, such as physics and aerodynamics, with their electromechanical and technology design skills to build prototypes, propulsion systems, and construction materials for aircraft. Furthermore, they ensure the systems they design and build function as they should using mathematical models, engineering principles, and testing. Aeronautical engineering also deals with flight technology and working with the aerodynamic shape of wings.

As part of the engineering process, aeronautical engineers incorporate elements such as budget analysis to minimize cost overruns, which in aircraft design can run in the millions of dollars. They must also monitor and follow safety guidelines, like those issued by the U.S. Federal Aviation Administration. As with every engineering field, problem-solving is at the core of aeronautical engineering roles. For example, an aeronautical engineer might be given the task of creating a design that balances fuel efficiency with performance.

What Is an Aerospace Engineer?

In the latter part of the 1950s, engineers began designing aircraft that went faster and traveled farther than ever before, into the upper atmosphere and even into space. The USSR launched the first artificial satellite, Sputnik, in 1957. The following year, Explorer I, the first satellite launched by the U.S., helped discover Van Allen radiation belts around Earth.

Aerospace engineering makes such innovations possible, with a focus on designing, prototyping, manufacturing, and testing aircraft systems that fly in Earth’s upper atmosphere and beyond. These include rockets, missiles, and satellites. Like aeronautical engineers, aerospace engineers combine their knowledge of mathematical models, engineering principles, and testing processes to ensure the systems they design and construct function correctly and safely.

Aerospace engineers may focus on a specific area associated with flying and aerospace. For example, they might specialize in jet propulsion: the force that propels an object like a rocket in one direction, produced by the ejection of a stream (or jet) of fluid in the opposite direction. Another specialization is aerodynamics, the study of air movement around objects such as wings.

As part of the engineering process, aerospace engineers use their understanding of structural design, navigation instrumentation, robotics, and combustion to work on large-scale projects. This often means working with other engineers, including electrical, computer, and systems engineers, who apply their skills in designing aircraft, spacecraft, and rockets.

This difference can be reflected in an engineer’s education. Common topics covered in aeronautical engineering courses include the study of thermodynamics, heat transfer, aircraft structures, and mechanical control and stability. Aerospace engineering courses expand on these topics to study the effects of aircraft flying outside of the atmosphere, including jet propulsion, spacecraft design, and orbital mechanics.

In all branches of aerospace engineering, a knowledge of project management is essential to ensure that tasks are completed on time, costs are managed, and collaboration between different engineering groups goes smoothly.

Whether your aim is to send humans to other planets or to improve how people navigate this one, both aeronautical and aerospace engineering involve solving physical problems in ways that can create opportunities for progress.

To succeed in either field requires both targeted engineering skills and management strategy. This combination of skills is what sets apart graduates of University of California, Riverside’s online Master of Science in Engineering program, which features a specialization in Mechanical Engineering. The program focuses on management strategy and technical competency throughout its core curriculum courses, including Engineering in the Global Environment, Technology Innovation and Strategy for Engineers, Introduction to Systems Engineering, and Principles of Engineering Management.

Learn more about how University of California, Riverside can help you acquire the key skills to work in aeronautical and aerospace engineering roles.

What Is Astronautical Engineering?

Indeed, “What Is Aeronautical Engineering? Education and Career Path”

Indeed, “What Is Aerospace Engineering?”